It snowed more today than it has in years, and nearly all of my Facebook feed filled up with my friends excitedly making snowmen, snow angels and snow ice cream!  I rhetorically asked Matt, “You’ve had snow ice cream, right?” And he said no!  I must have had it a dozen times growing up.  He even grew up in a place that got more snow than me!  Bent on fixing this incredible flaw, I strapped on my rain boots and went out gathering snow.  If you’ve never made snow ice cream before – stick to the tall drifts.  If there are no drifts, be careful scooping.  Dirt, stuff from trees, dog “things” can be lurking – stick to the tippy top of the snow.  I’ve also heard that you shouldn’t eat the first snow fall of the year.  If it never snows where you are and you have an opportunity – throw caution to the wind, my friends.

Clothe yourself in cute rain boots, gloves and if you have a metal bowl, bring that and a two cup measure.  Scoop up 8 cups of snow into your bowl, watching for sticks, poo, yellow snow, etc.  March in place at your door step to get all the snow off your boots.  Maybe even do a little dance.  Once warmly inside, drizzle a can of sweetened condensed milk all over the snow.  Mix well, smashing the clods of snow against the side of the bowl until it’s all worked throughout.  Mix in your vanilla paste and almond extract (use regular vanilla extract in equal amounts if you don’t have the paste.  The paste is fun – buy some.)
Serve immediately to lucky children and husbands alike. 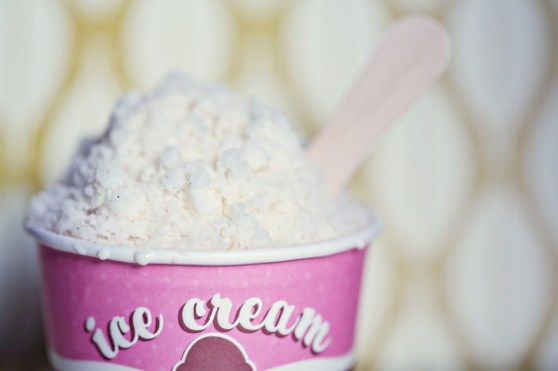