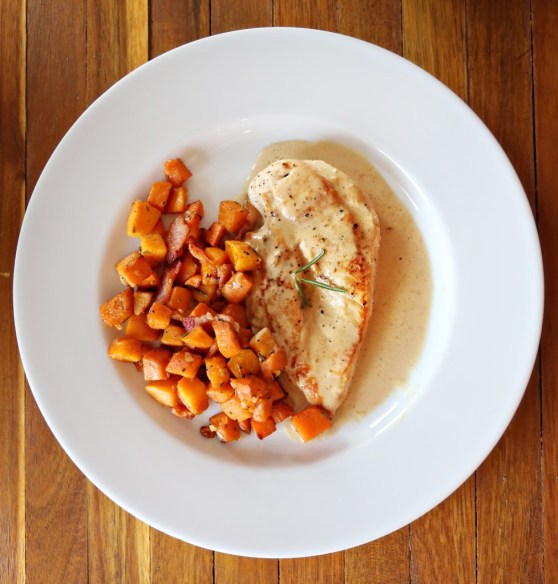 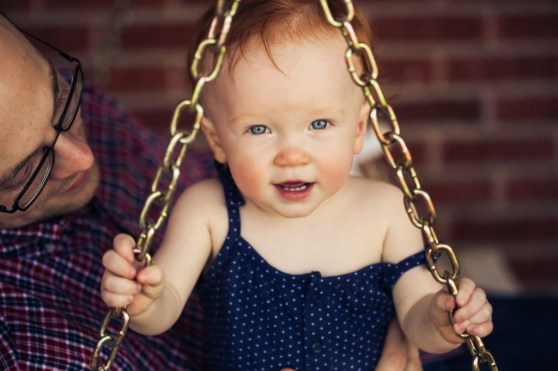 My little eater is back.  She had a week of not wanting to eat much at all and being rather scared of texture and new things, but we are officially back in the game.  It’s a relief, really.  I spend the majority of my days figuring out what to cook next.  I will clean up from breakfast and think about what I need to do for lunch.  After Olive’s afternoon snack, I clean up and think of what I need to start for dinner.  I really love it (thank goodness), but when you spend that much time preparing food, you naturally want everyone at the table to consume it.

Our food structure in the day is this:  Breakfast (usually oatmeal with some kind of fruit and milk), Lunch, snack around 3:30-4, Dinner, a little milk at bedtime.  That’s the only times Olive eats.  She doesn’t snack on anything between breakfast and lunch, or between lunch and 4 or between 4 and 7ish.  I really think that when you’re trying your best to get your children to eat a variety of good foods, it’s just shooting yourself in the foot if you let them snack around the clock.  In my (very short) experience so far, when Olive is hungry at meal times, there is rarely a fight over what is served.  She is rarely picky.  I think if she’d had a snack an hour before sitting down, it would be a lot easier for her to reject something new (tonight was roasted beets, pan fried fish and a tomato/bell pepper sauce).  And it’s happened before when she’s had a TON of milk before a meal.  Won’t eat.  Personally, I can’t handle going to the trouble of  cooking and having someone at the table refuse it and then beg for a snack 30 minutes after dinner is over.  The master chef, Fernand Pointe said, “Hunger is the best sauce” and I really love that imagery.  A sauce is a finishing touch – usually the part of the dish that makes it a little indulgent, a little special.  If you are hungry for a meal, everything is just a little more delicious than if you were merely eating because it was mealtime.  I’m not afraid of Olive being hungry.  I think it’s one of the very first lessons in delayed gratification that desperately needs to be instilled at an early age.  So many life lessons are learned by cooking and eating together, and this in my opinion, is one of the most basic.  Wait.  And how wonderful that you have at least 3 times a day to reiterate that important rule.  You wait to be served.  You wait on others before you start eating.  You wait and ask before getting down from the table.  You wait while others are talking before you talk.  It’s beautiful to me how sharing food can teach so much, and not only to children, but to adults as well.

This simple meal comes, once again, from Wini Moranville’s book, The Bonne Femme Cookbook.  A simple chicken dish and the sweet potatoes are an excellent finger food for little eaters.  I choose a baked tomato dish from the book as an extra side for this meal.  Everyone at the table enjoyed it all.  Olive liked the baked tomatoes the least and the chicken the most (but she tried everything) 🙂 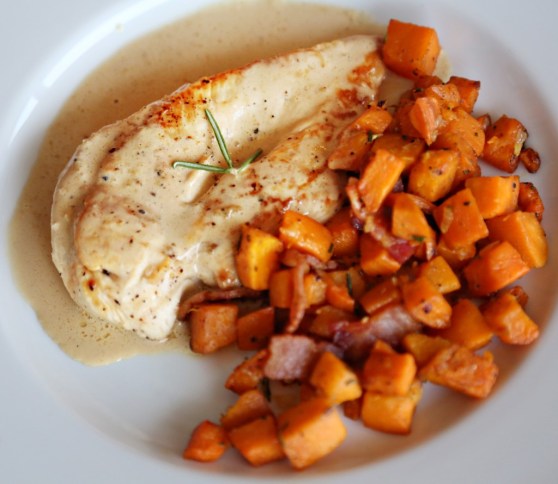 Preheat the oven to 300F.
Cook the bacon in an ovenproof skillet over medium heat until crisp; remove with a slotted spoon and drain on paper towels.  Measure the drippings from the skillet and add enough vetetable oil to equal 1 1/2 tablespoons.  Reduce the heat to medium and melt 1 1/2 tablespoons of the butter with the drippings and oil.  Add the sweet potatoes and salt and pepper.  Cook the potatoes, stirring occasionally, until browned and softened, about 15 minutes; add the shallot and rosemary to the pan after 5 minutes.  Transfer the skillet to the oven to keep warm.

Meanwhile, place the chicken breasts, one at a time, between two sheets of plastic wrap and pound to 1/4 inch thickness.  Season both sides with salt and pepper.

In another large skillet, melt the remaining 1 tablespoon of butter over medium high heat.  Add the chicken in batches and cook, turning once, until no longer pink inside, 6-8 minutes.  Transfer the chicken to a large platter and cover with foil to keep warm.

Remove the pan from the heat and add the chicken broth and Calvados, taking care not to let the liquid splatter.  Stir with a whisk to loosen any browned bits from the bottom of the pan.  Return the pan to the heat, bring to a boil, and boil until the liquid is reduced to 1/3 cup – this should take about 2 minutes, depending on the heat and your pan size; it will take closer to 4 minutes if you’ve substituted apple juice and wine for the Calvados.  Whisk in the cream and cook to a desired consistency.  Adjust salt and pepper to taste.

Crumble the bacon and stir it into the sweet potatoes.  Arrange the chicken on four dinner plates, arrange the potatoes around the chicken, spoon the sauce over the chicken and serve with Tomatoes au Four (recipe below). 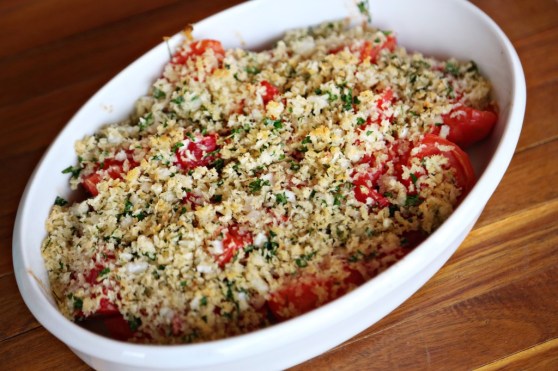 Preheat the oven to 400F. Lightly oil a baking dish large enough to hold the tomatoes without too much crowding.  Place the tomatoes, cut sides up, in the baking dish.

In a small bowl, combine the bread crumbs, shallow, garlic, parsley, thyme and salt and pepper.  Stir in the olive oil.  Spoon this mixture evenly over the tomatoes.

Bake until the tomatoes are hot and the bread crumbs are lightly browned, about 15 minutes.

2 thoughts on “Chicken Saute with Sweet Potatoes and Rosemary”