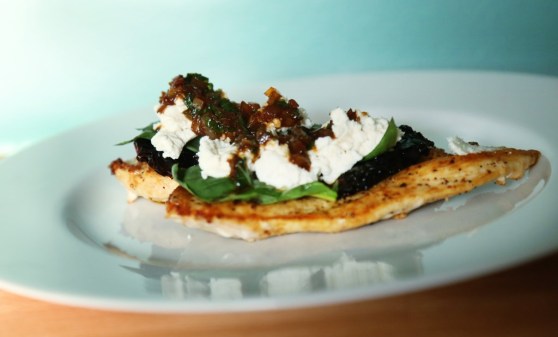 The first time I went down to Tulsa, Oklahoma to meet Matt in person, we ate this dish together with his family at a restaurant called Carrabba’s.  (We met via instant messenger, after a dear friend of mine, who was talking to both of us at the same time said, “Here, you guys talk to each other, you’re telling me about the same band” (Jurassic 5) and after talking that day, we talked every day, increasing in hours logged (we had only land lines way back in 2003 and ran through multiple calling cards each week.)  6 months later we were engaged, and a year after that, we got married.  We’ve been eating good meals together ever since. Aww)

Matt ordered the Chicken Bryan and we both marveled at the melty goat cheese and sun dried tomato mix that was tangy and sweet.  A revelation!  Since that day, I’ve tried to recreate it multiple times, but I never can quite replicate it.  (Not enough butter?)

This week, I tried again and I’m slowly getting closer.  It’s such a good dish, and as I look at their online menu, it says they drizzle a basil lemon butter sauce on top.  Ah.  That might help. Will try again next time!  I happily used up the rest of my goat cheese and even made a mini portion on a bread and butter China plate for Olive, just so she’d feel fancy, too.  (I think it worked, as she made some of the chicken into a hat near the end of the meal.)

As a side, I made the creamed spinach and basil recipe from a few weeks ago, and put a scoop inside squares of puff pastry, baked it, and although they didn’t stay together in the neat little pouches I folded, they were still amazingly good and a perfect side for this dish. 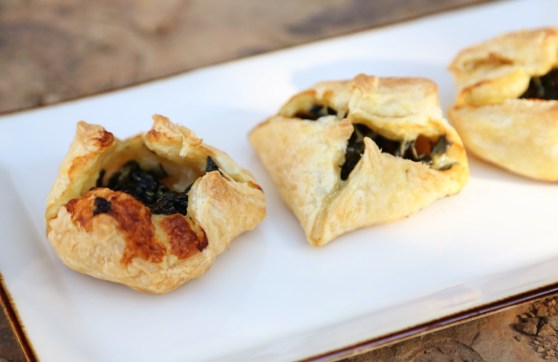 1 lb chicken tenderloins
Salt and pepper
4 tbs olive oil
1/2 cup sun dried tomatoes, sliced in half
8-12 basil leaves
1 shallot, diced small (1/4 cup – you can use an onion if that’s what you have on hand)
1/4 cup white wine or chicken stock
4 oz goat cheese

Pat the chicken dry with paper towels and season each side with kosher salt and pepper.  Heat olive oil (go two tablespoons at a time) over medium heat until shimmering and cook the chicken strips in batches, not over crowding the pan, or they won’t get a good sear.  Chicken strips don’t take long to cook, maybe 1-2 minutes per side. Let the strips sit on a plate, covered in foil to keep warm until ready to plate.  In your empty skillet, add the diced shallot and saute until golden.  Then, add in a splash of wine or chicken stock, scraping up the browned chicken bits and then add a tablespoon of butter to make a pan sauce.  Set your sauce off the burner so it won’t continue to reduce.

Put your chopped sun dried tomatoes in a saucepan with a quarter cup of water and let it simmer to re-hydrate a bit.  Assemble the chicken, two strips per plate, with a sprinkling of sun dried tomatoes, a basil leaf or two, and a slice of goat cheese.  Place the plates under the broiler until the cheese melts.  Drizzle your reserved sauce over the cheese and serve!