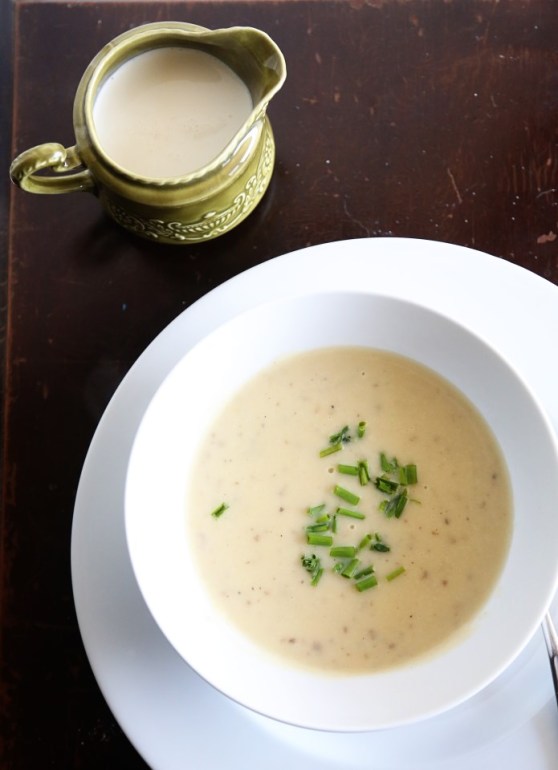 Too hot outside for another soup recipe?  What if I told you it was a cold soup?  Would that change your mind or keep you further away?  We are okay with gazpacho so why not potato and leek?  Maybe if it had a fancy French name?  Vichyssoise (pronounced vishy-swah) is a silky potato soup, cooled down with cream and it might just become your new favorite soup.

A French chef at the Ritz in the 1950s, Louis Diat, was credited with this soup’s [cold] invention.  He said as a boy, he and his brother would cool off the potato and leek soup his grandmother would make, by pouring milk or cream into the hot soup.  He loved the experience so much, he wanted to create a soup for his patrons at the Ritz similar to the soup he had as a boy.

I haven’t quite gotten behind the cold version, yet.  I think the silky potato soup is amazing hot and it has so much depth.  For a dish that has so few ingredients, it tastes like it has a dozen. The potato/leek combination is rather magical in and of itself.  Matt loves the cold version (chill the soup first, then add cream, or you’ll just end up with lukewarm soup if you add cream to hot soup) I love it hot, Olive loves it somewhere in between and once again, this is a great way to provide vegetables for a great little eater who is otherwise distracted by the experience of being two 🙂

I, of course, defaulted to my favorite French cookbook for the recipe – Winnie never steers me wrong! 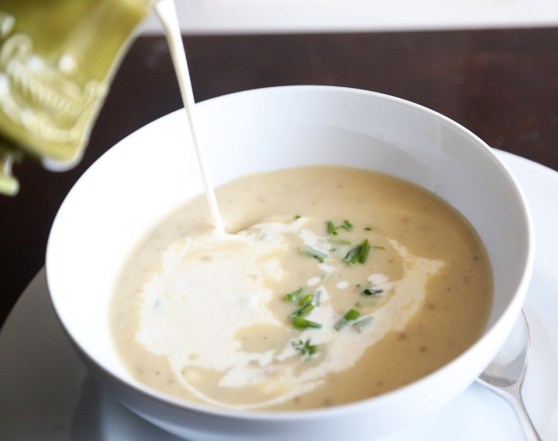 Rustic Vichyssoise* (rustic because I forgot to peel the potatoes first)

2 TBS unsalted butter
2 medium-size leeks (or one Texas size – white and pale green parts only, halved lengthwise, rinsed and chopped, about 1 cup)
6 cups low-sodium chicken broth (I had beef broth on hand and it turned out great)
1.5 lbs yellow or white potatoes, peeled and roughly chopped(or unpeeled if you forget and want to call it rustic :))
Salt and fresh ground pepper to taste
1 TBS heavy cream
1/4 cup snipped fresh chives for garnish

Melt the butter in a 4 quart saucepan over medium heat.  Add the leeks and cook, stirring, until tender but not brown, 4 to 5 minutes.  Pour in the broth slowly and then add the potatoes and salt and pepper.  Bring to a boil.  Reduce the heat, cover the pan, and cook at an active simmer until the potatoes are tender, about 30 minutes.

Blend in the pot with an immersion blender until no chunks of potato remain (or, working in batches, puree in a blender).  Stir in the cream and season with extra salt and pepper, if needed.  Garnish with fresh chives and add extra cream to your liking.  For making traditional Vichyssoise, chill the soup for a few hours and then add about 1/4 cup cold cream or half and half to each serving.  Re-season as needed.