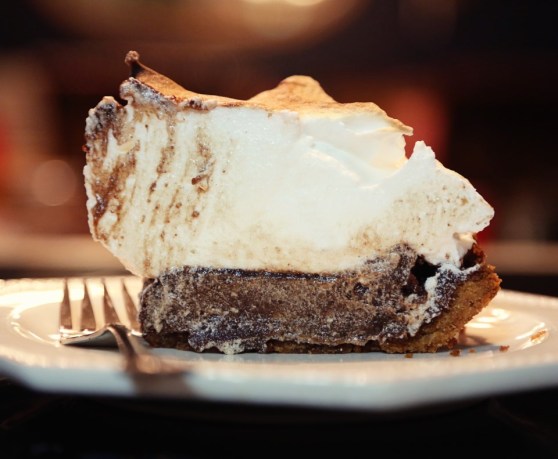 I had a wonderful Thanksgiving and I hope you did, too!  I got to spend it with my whole family!  Both my brothers came down with their children and with them and my parents, there were 16 of us bedding down in our old childhood home! I got to see my grandmother and my sweet Aunt Mary, too!  I really don’t think I’ve seen that much family in one weekend in several years. It was good for the soul and I don’t feel like I even overate as much as I usually do, which enabled me to enjoy the heck out of this pie I created on Friday night.

S’mores pie!  When we showed Olive s’mores for the first time this summer, we made them with dark chocolate.  I loved the balance the dark chocolate gave to the super sweet marshmallow and graham cracker.  So when thinking of a pie to make for Thanksgiving, I thought of doing the darkest chocolate pie I knew how to do and topping it with my favorite meringue and then torch the heck out of the top.

Seriously, if you want to win some kind of chocolate pie award, this is your pie.  Make it with a traditional crust and serve it with soft whipped cream and that is all you’ll need for ultimate bragging rights.  I nearly skipped out on the meringue, but I wanted that dramatic torched effect so I went with it.  I think if I were to do this pie over, I would give it more s’moresy flavor by just dumping a bunch of marshmallows on top and burning them to a crisp.  Because I’m that s’mores gal – the one who likes to eat slightly sweet bits of char instead of marshmallows.  I’d say most people aren’t like this or don’t have a coal deficiency or whatever, so I erred on the side of not-too-burnt.  The results were great and I will definitely make this pie again at Christmas!

My nephew, Landon, helped me torch it! 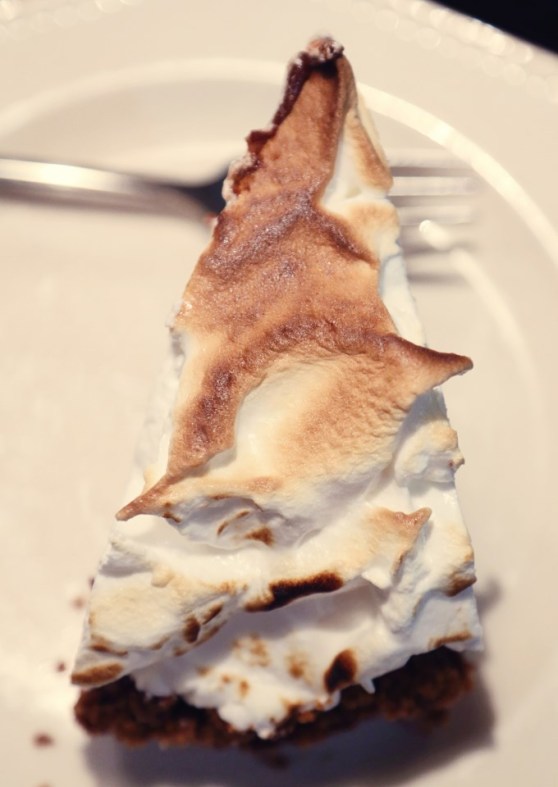 2 eggs, beaten
1-5 ounce can of evaporated milk
1 cup white sugar
1/4 cup brown sugar
2 TBS cocoa powder
1 TBS instant coffee granules
3.5 ounces dark chocolate, chopped
1/4 cup butter
2 TBS corn meal
For the crust:
1 and a half packages of graham crackers, crushed fine (12 large)
2 TBS sugar
4 TBS butter, melted
2 TBS water
pinch of salt
Preheat oven to 350 degrees.  Combine the crushed graham crackers, sugar, salt and butter until it’s well combined.  If it doesn’t hold together when you press it between your fingers, add the tablespoons of water.  Press into a 9″ pie plate and set aside.
Combine the eggs, evaporated milk and sugars until smooth.  Put the cocoa powder and instant coffee in a small cup and add a tablespoon of water and whip it into a paste.  Whisk this paste into the egg/milk mixture.  Melt the dark chocolate and butter together in a microwave at 30 second increments, stirring after each time until completely smooth and glossy.  Add the chocolate and butter to the egg mixture and then whisk in the corn meal until smooth.
Pour into the pie shell and place your pie on a rimmed baking sheet and bake for 45 minutes to an hour, until the middle doesn’t jiggle anymore.  Let the pie come to room temp before making the meringue!
For the meringue:
5 egg whites, room temp (room temp is important)
1 cup of sugar
1/3 cup water
Place the sugar and water in a small saucepan and bring to a gentle boil till the temp reaches 250 on a candy thermometer.  While it’s boiling, put the egg whites in a mixer at medium speed and beat with a pinch of salt until soft peaks form.  When the sugar is up to temp, remove from heat and while the mixer is going on medium, drizzle the syrup in a very thin stream until completely incorporated and then increase speed to high and whip until the bowl cools down.  This takes a while so be patient.
Assemble!
Dump ALL the meringue on top of your ROOM TEMP pie and with a blow torch (such a great addition to any kitchen) or a dainty creme brulee torch (not as fun) torch the meringue until evenly browned.  If you have neither, you can brown it in the oven under the broiler but you have to be VIGILANT as to not burn the meringue.  A broiler works scary fast.