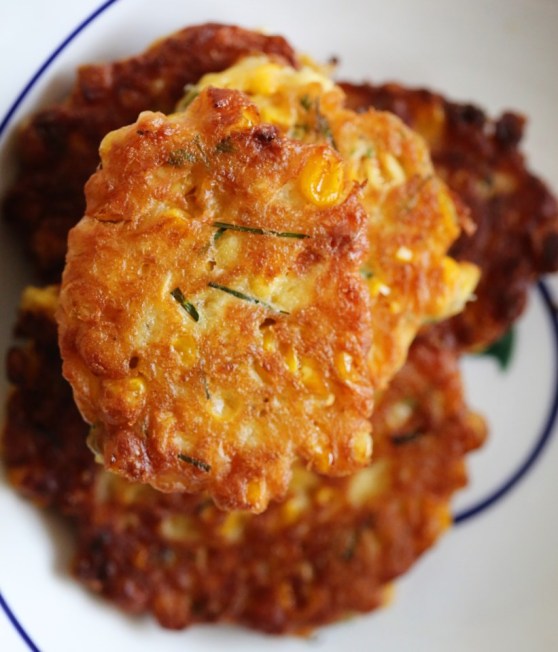 Last week I posted a recipe for Curried Cream Corn and today I want to share with you what to do with the leftovers! In our house, we still have leftovers on a regular basis. With just two adults and one three year old who eats like a bird, we don’t usually use up side dishes in one meal. I transform a side dish into probably four different things by the time the week is over. I might start off with simple roasted corn at the beginning of the week and by the time it’s gone, it’s become part of a chicken wrap, a hash, an omelette, a souffle or perhaps just made into baby food.

With this curried cream corn, however, the flavors stack up perfectly to become a tasty little fritter. This is another recipe where I just eyeballed the amounts, but I think it’s pretty fool proof and I do have amount approximations for you to follow. Serve these fritters with a bit of sour cream and a side salad for a light(ish) Meatless Monday! 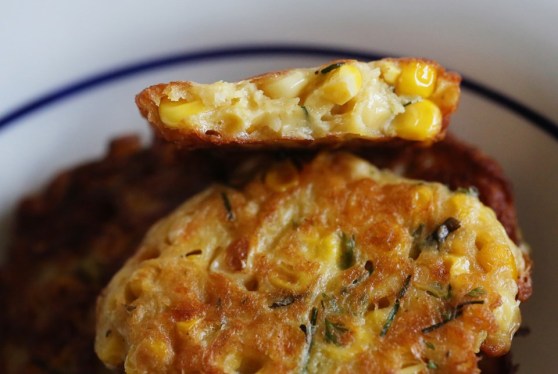 In a large bowl, combine your creamed corn, flour, salt and pepper, egg and chives (and whatever else you think sounds good!) and whisk to combine. You may need more flour depending on how much liquid your curried cream corn still had remaining. You may have cooked off more than I did, so depending on how liquidy it is, add a bit more flour so that your mixture resembles thick cake batter. If it is dry, thin it out with a little milk.

Heat olive oil in a nonstick skillet over medium high heat until it shimmers and drop the fritter batter by tablespoons and let them fry about 2 minutes per side, or until dark brown on both sides. Remove and let them drain on a paper-towel lined baking sheet and keep them warm in a 200 degree oven until you’re ready to serve. 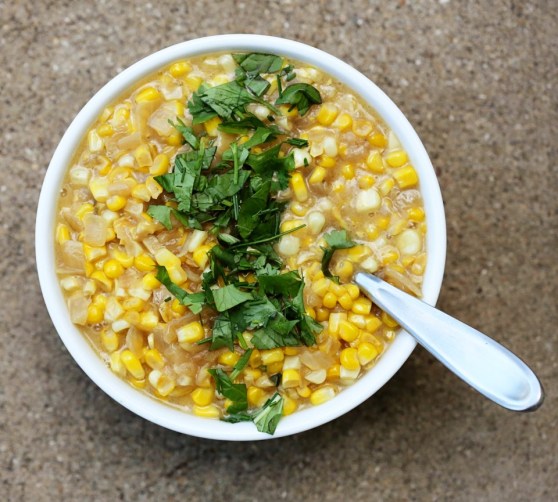 Every summer we come up with a corn dish to bring to cookouts and to utilize the crazy cheap ears of corn available from about May through August. As this summer is coming to a close, I wanted to share a recipe that is summery and yet has the warmth in flavor of the fall season just around the corner. As the weather cools, I start thinking of slow simmering stews and soups and braised meats and one really great way to shake the flavors of your kitchen up a bit is to introduce Asian and Indian flavors into your meals. We often use coconut milk when making rice to accompany a Thai dish and sometimes we throw curry powder into a soup to give it that depth of flavor we love in Indian cuisine. For this creamed corn, we combined all three: a curry, coconut milk, Southern creamed corn dish that delivers in flavor and comfort.

This recipe won’t necessarily be “printer friendly” as it’s a “little of this and a little of that” type of recipe. I honestly don’t recall the ratios, but we adjusted and tasted along the way and that’s part of the fun in cooking, in my opinion. Use your own preferences to guide you! We have some lemongrass growing in the backyard (I was so surprised it did well, but it’s BEAUTIFUL – highly recommend you plant some!) and so that’s thrown in there, too. This is not one cuisine or another, it’s just a bunch of flavors we all love! I hope you will love it, too! 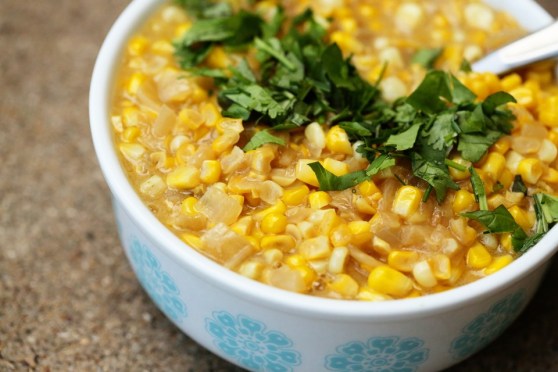 3 or 4 ears of corn
1 large, sweet yellow onion, chopped (about a cup)
2 tablespoons coconut oil
1 can full fat coconut milk
1 tablespoon sweet curry powder
1 stalk of lemongrass, split in two and bruised with the butt of your knife to release the flavors and oils
2 kafir lime leaves
fresh cilantro and basil, about a cup total, chopped
squeeze of lime

Slice the corn kernels from the cobs (use a serrated knife to make this easier and be careful!)
In a large skillet, heat the coconut oil until shimmering. Toss in the onion and cook until soft and starting to brown.
Add enough coconut milk to cover the corn – this may be the entire can (shake the can really well before opening!) or it may just be half. It kind of depends on how big your corn cobs were. We don’t want the corn to be positively swimming, but just enough liquid to cover the kernels.
Let the corn and coconut milk come to a boil and then add in the curry powder, lemongrass and lime leaves. You can find kafir lime leaves at most Asian supermarkets in the refrigerator section. They like to keep them cold. If you can’t find it, it’s not going to ruin anything, but it adds such a bright, interesting flavor!
Reduce the heat and let the corn and coconut milk and spices simmer for a while, adjusting the seasoning with salt and pepper as you like. When the liquid has reduced just a bit, stir in the chopped cilantro and basil and adjust the seasoning again to your taste with a squeeze of lime and salt.

I’ve got a great use for leftover creamed corn coming up later this week, so stay tuned! 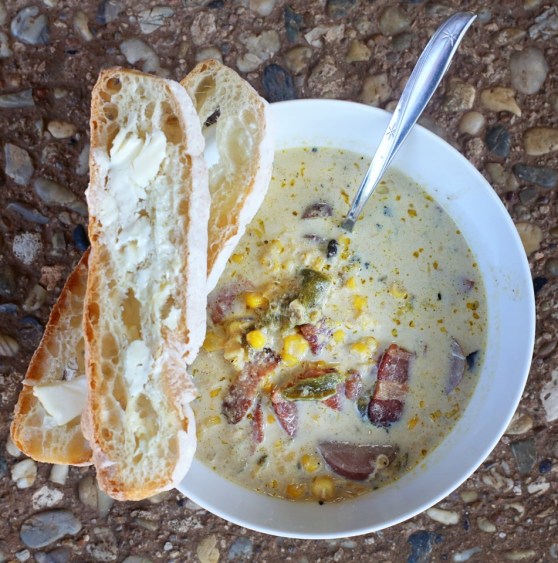 Matt’s been talking for a few weeks, now, about the corn chowder I made around this time last year.  I made a curried corn chowder when we lived in our apartment a few years ago and it was definitely something to write home about, although no one wrote about it and we just enjoyed it, as people tended to do before Facebook.  Last year, the chowder was more traditional, but nonetheless delicious, and for some reason, so summery, despite its warmth and chowdery-ness.  Sweet summer corn, smoked bacon, and this year: the addition of roasted green chiles.

The joys of making a soup or stew, for me, are in the slow development of flavors, and figuring out the best way to go about that process.  This time, I knew I wanted to really preserve that sweet corn flavor while at the same time, bring in a little heat and umami that a roasted green chile can provide.  So,  at the beginning of cooking, I let the chilies and half the corn roast together and I let the trimmed corn cobs boil in the broth the entire time, to draw out the sweet milkiness that is left after you trim the corn off the cobs.  I pureed half the ingredients to blend up the chile skins, which I left on for flavor, and then added more chilies and fresh corn at the end, along with super smoky bacon to round everything out.  The results were pretty balanced;  just enough heat from the chilies, sweetness from the corn, and perfect with a crusty piece of bread to soak up all those flavors.

Summer is winding down and even if you miss out on making this soup while everything is still fresh, the method of cooking will give you wonderful flavors well into the winter soup months.  Enjoy! 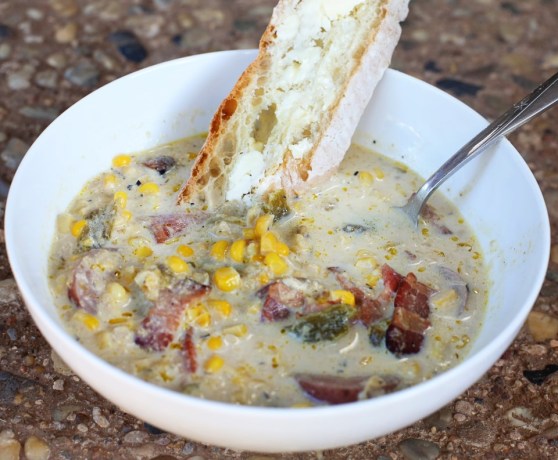 Cook bacon in a large stock pot over medium-high heat until fat renders and bacon crisps.  Remove bacon with a slotted spoon and set aside on a paper towel to drain.

Add onions, celery, two whole green chilies (stems removed) and half the corn kernels to the pan and cook, stirring, until the onions are translucent.  Add chicken stock and corn cobs and bring to a boil.  Let simmer for 15-20 minutes.

Remove the cobs from the broth and discard.  Puree the soup with an immersion blender or in batches in a blender until very smooth.   If you used a blender, return the pureed soup back to the pot and add the remaining corn, potatoes and chilies and cook until the potatoes are tender, about 15-20 minutes.  Add half and half and adjust seasoning with salt and pepper.  Stir in the bacon and bring the soup back up to a simmer. You can also just use the bacon as a garnish if you want it to remain crispy. Serve with crusty, buttery bread and enjoy!