Alisa: I wanted Matt to write about the bread that he’s made countless times in the past seven years.  He started on a quest to learn to bake at the same time he wanted to become more likable at his office (to improve his performance review, which, the only thing that was negative was, “Matt’s kind of intimidating”) and so the two tasks naturally went hand in hand.  After one year of bringing bread in to the office every Friday, not surprisingly, there wasn’t a negative comment on his next review 🙂  Bread is the great equalizer.  This loaf, in particular, is beautiful in its simplicity, flavor, crusty exterior and soft, spongy interior.  Frankly, it’s the perfect loaf.  I think life has a lot of challenges, but if you could say that you could turn out a loaf of bread like this (given a day’s notice) any time it was needed, well, I’d consider that success.

Matt: I like making things from scratch. I enjoy learning how things work, and with cooking you usually end up with something better than what you can get at the store – and it’s cheaper, better for you, and you even get a night’s entertainment out of it. So I guess it was just a matter of time before I got into baking. I’ve been making bread pretty regularly for a few years now, and I’ve certainly gotten better, but I’m still an amateur. Bread is one of those things that you could devote your life to (think Jiro Dreams of Sushi) and still find things to improve on.

That’s part of why I love it, but if that sounds disheartening to you, the good news is that even the poorest homemade loaf is better than anything you can get at the store. With a little bit of practice you can make bread better than you can get anywhere (unless you happen to live in San Francisco, New York, or a country that still cares about good bread). It’s kinda like chocolate chip cookies – the best bread you can buy where I live is essentially the bread equivalent of Chips Ahoy. Maybe you live somewhere with a bakery that sells something other than cupcakes, but unless the guy behind the counter looks like this, I’m guessing the bread there is still a Soft Batch at best. I’m sure the worst batch of homemade chocolate chip cookies that came out of your mom’s oven blows either of those away. The bread that will soon come from your oven is the same – once you’ve tried it, you’ll be hooked.

Bread
21 oz bread flour (or AP flour if you prefer)
14 oz water (66%, for the bread nerds out there)
1 tsp instant/rapid rise yeast
2 tsp salt
Mix up the dry ingredients (you are using a scale, aren’t you?) and then add the water. Mix until the flour is all hydrated then cover it and set it aside for twenty minutes. (Or I could just say autolyse. See, you should become a baker, we have our own secret language.)
Stretch the dough out and fold it back up in thirds like you would a letter. Turn the dough 90 degrees and repeat, then put it seam side down in an oiled bowl. Wait ten minutes, then repeat. After three of these stretch-and-fold sessions your dough is probably developed. Put the dough back in the bowl and cover it and place it in the fridge overnight, or for up to 2-3 days (you might use less yeast if you know you’re going to wait several days to bake).
About two hours before you want to bake, take the dough out and let it warm up on the counter for a bit. Press it out into a circle (gently, we’re not making pie), then gather each side up to form a ball. Roll the ball in small circles on the counter to develop surface tension. This is a lot easier to understand when you see it, so you might want to watch a video.
Put the dough (now a boule, if you want to talk the talk) into a bowl lined with a floured towel. I use a basket called a banneton, which I flour directly, and it leaves little rings of flour on the loaf.
Leave the dough covered, on the counter to rise. This will probably take about an hour and a half, but you can tell if a loaf is still rising by poking it gently – if it springs back quickly, leave it to rise some more. If the indention stays, you’re ready to bake.
About a half hour before baking, preheat your oven to 450, with your baking stone, Dutch oven, or preferred baking device inside. You can bake on a sheet pan, and if that’s your plan you don’t need to preheat for very long. I recommend a Lodge cast iron combo cooker, which gives you the added heat while also trapping steam, and you can put dough into it without getting second degree burns, which is tough to do in a normal Dutch oven.
When the dough is ready, remove your preheated Dutch oven and flip the bowl over to put the dough into the pan. Make a couple of cuts in the loaf so it doesn’t rupture when it rises in the oven (this is called scoring), then put the lid on the Dutch oven and return it to the oven for thirty minutes.
Remove the lid from the Dutch oven and bake another 30 minutes.
Remove the loaf from the oven (the interior of the loaf should be around 200 degrees, if you want to make sure it’s done) and put it on a rack to cool. Lean in close and I bet you can hear the loaf “sing.” It’s tempting to cut into it right away, but I promise it’s better if you let it sit and finish cooking – think of it like resting a steak.

This is one of the best cookies I’ve ever had in my entire life.  Crispy on the outside, chewy and soft in the middle.  Sweet, salty, and incredibly buttery.  It uses a mystery ingredient: corn powder. All you do (and believe me, slackers, this ingredient is worth whatever effort you don’t want to put forth) is buy a bag of freeze dried corn off Amazon and pulse it in your blender or food processor till it looks like powder.  Then, you’ll have enough for a few batches of these amazing cookies.  The corn powder adds to the incredible butter flavor and if you don’t tell anyone, they won’t be able to pick out the secret ingredient.  They’ll just sit and marvel that they are enjoying the greatest cookie (that doesn’t include chocolate) of their life.

This recipe is from the wonderful Momofuku Milk Bar cookbook.  Matt made Olive’s first birth-day (made it when we came home from the hospital with her) cake from this book, my birthday cake and the Crack Pie that we’ve made a few times and won a smallish award (in a contest created by us) for best non-fruit pie at our Pie Bake-Off.  Christina Tosi is undoubtedly a genius, as Momofuku  Milk Bar’s creative pastry chef.  It’s only her hummingbird-like brain that could come up with such nostalgic, creative, sugar-rush kind of desserts.  She is a child at heart, which shows so evidently throughout this cookbook.

Word of caution: if you like to get in and out of the kitchen quick, this book isn’t for you.  (the cookies were easy enough but the rest…) My birthday cake had Matt in the kitchen for two days and involved around 5 different recipes for one cake alone.  However, it was the best cake ever.  I don’t need to reiterate that good things are worth the hard work, but I will.  To quote Bob Kelso, “Nothing in this world worth having comes easy.”

And every recipe from Momofuku Milk Bar is worth having. 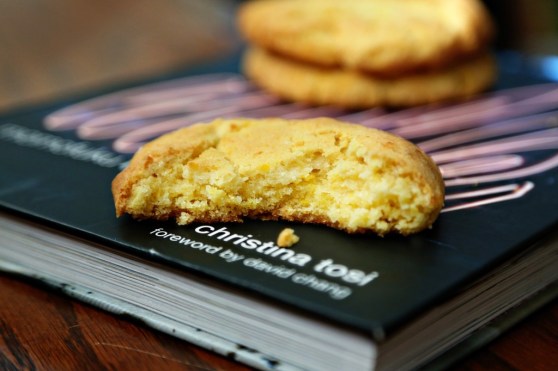 1. Combine the butter and sugar in the bowl of a stand mixer fitted with the paddle attachment and cream together on medium for 2 to 3 minutes.  Scrape down the sides of the bowl, add the egg, and beat for 7 to 8 minutes (this is important.  This long mixing process is what gives the cookies their amazing texture)

3. Using a 1/3 cup measuring scoop, portion out the dough onto a parchment-lined sheet pan.  Pat the tops of the cookie dough domes flat.  Wrap the sheet pan tightly in plastic wrap and refrigerate for at least one hour.  Do NOT baking your cookies from room temp – they WILL NOT bake properly.

5. Arrange the chilled dough a minimum of 4 inches apart on parchment or silpat-lined sheet pans.  Bake for 18 minutes (Mine looked perfect in exactly 18 min. They know their stuff) The cookies will puff, crackle, and spread.  After 18 minutes, they should be faintly browned on the edges yet still bright yellow in the center; give them an extra minute if not.

6. Cool the cookies completely ON the sheet pans before transferring to a plate or your mouth (yeah right, you know you’ll eat a warm one and you SHOULD).  At room temp, the cookies will keep fresh in an air-tight container for 5 days.  But I really doubt they’ll last that long.

*I think measuring your flour, corn flour and corn powder by weight is really important.  Reason:  I first did it by volume and measured out 1 1/3 cups.  Then, to double check, I weighed the flour I’d measured and it was only something like 210 grams.  That’s enough of a difference to matter in the final result.  Just FYI!