I made one of our favorite Indian dishes the other day from a recipe I saw in the latest issue of Real Simple Magazine and it turned out great!  We had a ton of leftovers and so the next day, I decided to turn them into these amazing little sub sandwiches.  With tons of cilantro, crunchy cucumber and cold sour cream to offset the spicy chicken, it became the perfect sandwich.  I highly recommend doing this original recipe and then adapting it into these tasty little sandwiches.  It would also make an amazing wrap with black beans and rice!

In a 4-6 quart slow cooker, add the tomatoes, onion, garlic, tomato paste and spices and stir and taste for seasoning.  Place the chicken thighs over the tomato mixture and cook on low for 8 hours or on high for 4.  Shred the chicken and remove bones (if you used bone-in).  Stir in the heavy cream and let it keep cooking for about 10 minutes while you get everything else ready.  Serve over rice with lots of cilantro, or make these sandwiches by splitting hoagie rolls down the center and layering the chicken with sour cream and topping with fresh sliced cucumber and cilantro.  And garnish with lots of sriracha sauce for extra spice!

This was an incredibly flavorful dinner for us last Tuesday night.  It was one of those meals that came from a lack of motivation to go to the store.  I had two large potatoes, an onion and some puff pastry and I knew – there’s a meal there, somewhere.  With just a little prep, I had a meal on the table in about an hour.  I made these with left-over pie crust, as well, but everyone, including Olive, preferred the ones with puff pastry.  Buttery and flaky with that smoky curry spice went exceptionally well with the tang of the yogurt and dill.

This meal included one of those moments where I wasn’t giving Olive any sort of chance and declared that she wouldn’t like the yogurt sauce and so I didn’t offer her any.  After we had eaten a few bites, she said, “I want the sauce?!” and so I put some on her plate and she ate it all!  Yet another lesson in giving your kids a chance to prove you wrong. You never know when they’ll surprise you! 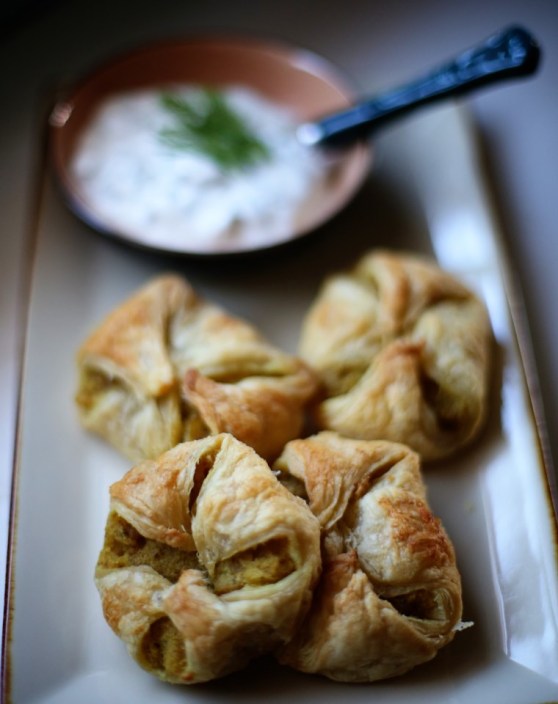 In a large skillet over medium heat, melt the butter and once it starts to froth, add in the onion and potato.  Stir around until the potato begins to soften and then cover with a lid and cook for about 10 minutes.  Remove the lid and add in the curry, cumin and salt and pepper.  Continue cooking over low heat until the potatoes are completely soft.  Remove mixture from stove and set aside.

Set your oven at 400F.  Mash the potato/onion mixture in a bowl until mostly smooth and adjust the seasoning as desired.

Cut the puff pastry into 9 squares and put a heaping tablespoon of filling in the middle of each square.  Dip your finger in the cream and dab along the edges and pinch/fold them together into little letters – really, however you pinch and fold is up to you, as long as they have a fighting chance of staying closed while baking! Place on a greased cookie sheet and repeat until all the squares are filled.  Brush the tops with the remaining cream and bake for about 30 minutes, or until golden brown.

For the yogurt dipping sauce: simply chop the dill and squeeze the lemon into the yogurt and stir till combined.  Adjust with a little salt and serve along side the pastries.  Personally, I don’t like this sauce on its own, but with the curry pockets, it’s just an amazing balance of flavors.